All about CNC machines A CNC machine is a type of industrial tool that performs commands based on the numeric code that is entered into the machine. Many CNC (computerized numeric code) machines are types CNC, or computer numerical control, allows a computer to dictate the moves a machine makes to perform cutting function.
Originally, all machines were operated manually with the distinct possibility of mistakes. The CNC machine performs these same actions with more precision as well as more speed. The first CNC machines were manufactured in the 1970s to speed up production at large manufacturing plants and were very expensive and difficult to use.
A CNC machine offers increased flexibility and productivity. The machines are automated milling devices that use coded instructions and programs to make parts. The programs are sent to the machines using an internal computer.
A CNC machine works though a computer program that you put into it and will do what you have entered to be done. It has a motor, cutter, and vice that will hold onto what your going
There are many different types of CNC machines including machines that are retrofitted or custom built for CNC operation.
Common CNC machines are milling machines and a lathe. Other machines include grinders and cutters. CNC machines used in metal shops as well as production shops today around the world .These machines use computer controls to make intricate movements to cut and shape metal, wood and plastics. These machining centers use computer controls to cut different materials. They are able to translate programs consisting of specific number and letters to move the spindle to various locations and depths. Many use G code, which is a standardized programming language that all CNC machines understand, while others use proprietary languages created by their manufacturers. These proprietary languages are often simpler than G code, but not transferable to other machines. 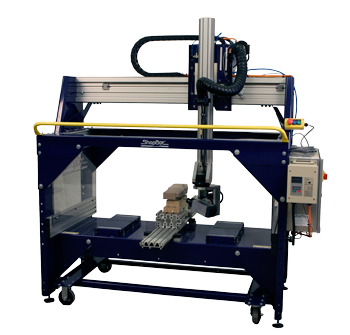 Lathes are machines that cut metal that is often turning at fast speeds. CNC lathes are able to make fast, precision cuts using index able tools and drills with complicated programs for parts that normally cannot be cut on manual lathes. These machines often include 12 tool holders and coolant pumps to cut down on tool wear. CNC lathes have similar control specifications and can read G code as well as the manufacturer's proprietary programming language.

Grinding metal is a process that uses a coated wheel that slowly removes metal to create a part. Through the years, grinding was done on a manual machine, but with the advent of CNC technology, the grinding process has advanced dramatically. Enter the program, which includes the various passes that the wheel will make, and hit start. It is one of the easiest types of CNC machines to work with as they often only contain a single grinding wheel.

CNC machines offer many benefits over manual machines of the same type. Since the machines are using complicated programs, many parts that were not previously possible are now being created with 3D computer-aided manufacturing software.
You can design a part and convert the dimensions to G code. You can often do this right at a CNC control and run the program immediately. These machines save time and money, resulting in cost saving due to lower amounts of waste from mistakes.

What types of motors are used on CNC machines? 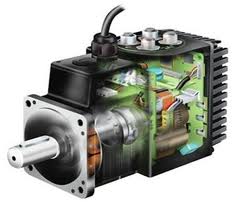 Stepper Motors and Servo Motors
The name "stepper" comes from the steps made by the motor with every signal pulse. It is simple to operate, inexpensive compared to servo motors and has a high reported

Steppe motors inexpensive compared to servo motors and has a high reported accuracy. Its low speed torque enables the use of a pulley reduction and timing belt, allowing several loads to be driven without gearing.

Stepper motors typically have a lower efficiency than servo motors. It is also resonance prone, and smooth movement often requires micro stepping.
Loads do not accelerate rapidly due to the low torque to inertia ratio. Despite the loud noise and overheating at high performance, stepper motors have an overall low power output for their weight and size.

A servo motor is a rotary actuator that allows for precise control of angular position; it consists of a suitable motor coupled to a sensor for position feedback. It also requires a relatively sophisticated controller, often a dedicated module designed specifically for use with servomotors.
Servomotors are not a different class of motor, on the basis of fundamental operating principle, but uses servomechanism to achieve closed loop control with a generic open loop motor.
Servomotors are used in applications such as robotics, CNC machinery or automated manufacturing

Servo motors use closed-loop circuitry to transfer information to the CNC machine. A regular DC or AC motor is connected to an encoder fixed with a sensor. Servo motors have high accuracy and resolution owing to the sensor-fixed encoder. The motor is powered by the servo amp, which also counts the steps made. Its high torque to inertia ratio enables rapid load acceleration. With lighter loads, efficiency may reach up to 90 percent.

Servo motors are generally more costly than stepper motors and more complicated to operate. As peak operating power only develops at high speed, and the ventilation system easily becomes contaminated, servo motors are more susceptible to damage due to overheating and overloading. They also require servicing after the brush reaches its 2,000-hour life span.
Stepper motors typically have a lower efficiency than servo motors. It is also resonance prone, and smooth movement often requires micro stepping. Loads do not accelerate rapidly due to the low torque to inertia ratio. Despite the loud noise and overheating at high performance, stepper motors have an overall low power output for their weight and size.
Sharing in :